A look into their struggles to be seen, heard and accepted

This June, as we navigate through talking about issues and how far we have come as a part of and as allies to the LGBTQ+ community, it is also important to talk about the groups within the community that still struggle to be seen and validated for who they are. In particular, Asexuality and Aromanticism are very underrepresented in mainstream media and are only now slowly gaining attention and visibility.

Asexuality is the term used to refer to experiencing very little to no sexual attraction. Asexuals do not have any desire for a sexual partnership. Asexuality is different from celibacy (where a person deliberately abstains from sexual activity) and it is not the same as being aromantic.

Aromanticism refers to experiencing little to no romantic attraction towards anyone. People who are aromantic are not always asexual and vice versa.

And the most important thing to remember here is that asexuality and aromanticism exist on a spectrum and that there are a lot of different identities within that spectrum. For instance, Demisexuality falls under the asexuality spectrum and refers to experiencing sexual attraction only after forming an emotional bond with someone (which need not be romantic either).

To learn more about the many different identities within the spectrum, start here.

The Struggle with Visibility

Here lies the biggest obstacle that the people in these communities have to overcome – visibility. A lot of asexuals and aromantics struggle with their own feelings and rather than allowing for space to come to terms with their questioning, they suppress their true identities because let’s face it – we live in a very heteronormative society. And even within the LGBTQIA+ community, most of the narratives and stories talk about acceptance and finding happiness through love and sexual exploration. And while there is absolutely nothing wrong with those narratives, it is a fact that there is a definite lack of space to narrate the stories and experiences of those exploring identities that have no desire for either.

We have come to constantly associate happiness with love and finding romantic partners through all the movies that we see growing up that it becomes difficult to even think about the existence of people who have no desire to find romantic love or to explore it through sexual intimacy. In mainstream media, asexuality and aromanticism are almost never talked about and even in the sliver of instances that they are, it is a subtle implication rather than an explicit statement.

The most popular character in media that had openly identified as asexual was Todd Chavez from BoJack Horsemen in 2014. Till 2018, GLADD (which is an NGO that was founded as a protest to the defamatory coverage of LGBT people in media)  had found that he was the only character in any streaming platform that identified as asexual. But perhaps the most revolutionary piece of literature that goes under the radar is The Deed of Paksenarrion (1992) written by Elizabeth Moon. The titular character,Paksenarrion Dorthansdotter, openly rejects the idea of marriage and expresses no desires for love or sexual intimacy.

For aromantics, the list dwindles down even further, with the first ever representation coming in the form of the book Parahumans by John C. “Wildbow” McCrae where the character Wilbourn Lisa identifies as aromantic and asexual published in 2011.

The most interesting thing to note here is how most if not all aromantic representations are tied to also being asexuals when they are not always intersecting in real life.  And even more interesting is how there is almost no representation for ace/aro people in India.  It is 2021, there are only a handful of asexual and aromantic characters globally and the ones being represented come with a slew of problems and misrepresentations. With the last article mentioning how important it is to diversify representations in media and culture, asexuals and aromantics get the shortest end of the stick even within the LGBTQ+ community.

What does the struggle for visibility mean for mental health?

A new poll by Sky Data asked UK adults how confident, if it all, they would be in defining asexuality. Of the 1,119 people questioned, 53 per cent said they were confident in explaining the term. However, when they were put to the test 75 per cent were either wrong or did not know that some asexual people do experience a sex drive.

A study done in 2011 also suggested that the prevalence of anxiety, depression, interpersonal problems and suicidal tendencies do seem higher in the asexual individuals when compared to people from other identities.

This can also be understood as a problem arising due to lack of understanding and empathy and validation of the identities of the people in the ace and aro communities and could severely affect their mental health.

Conflicts within the LGBTQ+ Community

There are a lot of other struggles that the asexual and aromantic communities face and surprisingly it comes from within the LGBTQ+ community. The early 2010s saw a lot of discussion about how asexuals and aromantics are not a part of the LGBTQ+ umbrella terms since they do not experience as much hatred and pushback as homosexuals do. While this sentiment is absolutely misinformed, it did gain traction. A lot has changed since then but the belief that asexuality is just celibacy or abstinence still exists. And the notion that aromantics are soulless, cold robots with no emotions is also still prevalent. The LGBTQIA+ communities are safe spaces that welcome anybody and everybody; from those sure in their identities to those questioning and should never become places of exclusion of any kind for it would defeat the purpose it set out to serve.

However, the biggest struggles often come from within and it is often true when talking about questioning identities as well. The lack of representation, awareness about LGBTQ+ spectrums and barriers from all sides often leave the asexuals and aromantics feeling invisible and pushes them to question their newfound identities and develop an uncomfortable distaste for it. For what good is a person if they cannot love someone in the way “they are supposed to be loved” right? At least that is the narrative that society pushes on them. The Indian cultural influence and pressure to have kids but to stay celibate until marriage leads a lot of people to misidentify themselves or forces them to become someone they are not, to satisfy society’s expectations of them. Hence, a lot of aces and aros stay closeted or do not feel comfortable to openly state their identities and end up believing that there is truly something wrong with them.

Below is a wonderful and poignant comic on a person’s struggle with accepting their asexuality and aromanticism and serves as a glimpse into how those belonging to either or both to these spectrums feel alienated and unheard. 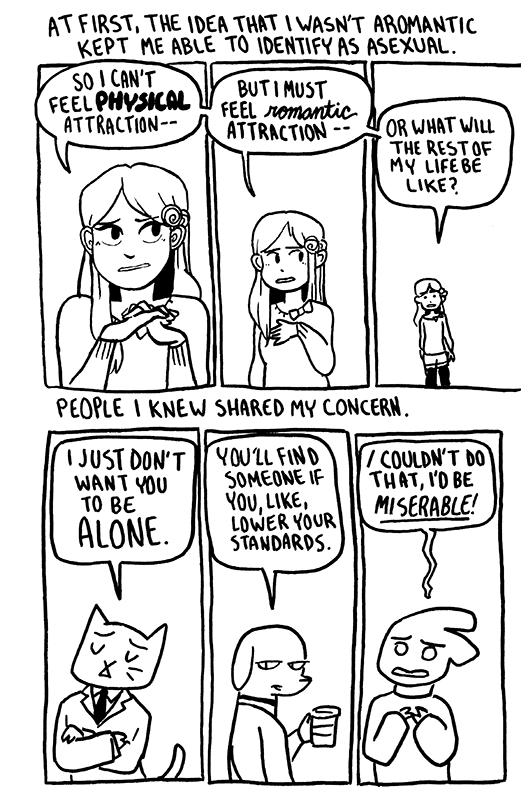 Here is the full comic: Aromanticism comic by Kotaline Jones

Here are a few other voices from aces and aros on the struggles they face and what it feels like to be themselves.

With asexuality and aromanticism being very fluid, it is often such that the identities keep changing with the passage of time. But that does not mean that any of them are invalid. You and your identities are valid no matter what and your worth does not lie in your ability to love someone romantically or in revelling in sexual intimacy with them. The world is too big to be put into boxes and labelled and the same goes with people. You are wonderful and deserving of all good things just the way you are, and fear not for we have Spongebob Squarepants on our side! (Spongebob is identified to be asexual)

Here is an article on how to be a good ally to the LGBTQ+ community which unequivocally also includes those in the asexual and aromantic spectrum.